6 Temple Should You Visit In North Bali

Bali is well-known for its natural beauty so called as the Island of Paradise, and Bali is also famous as The Island a Thousand Temples. Temples in Bali area spread in all area. Wherever we go will definitely see the temple. This is what makes Bali famous as A Thousand Temples Island. Some great temples are scattered in North Bali with beauty and uniqueness as a place to worship God. 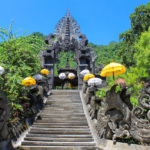 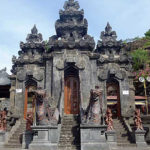 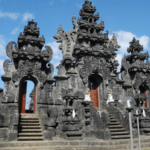 Pulaki Temple is one of a big temple in North Bali. Pulaki Temple is a religious aura temple surrounded by a stunning view of nature. Pulaki Temple located on a rocky cliff overlooking into the Bali Sea with its charming scenery and backdrop of the steep rocky hill. This holy temple is located in the village of Banyupoh, Gerokgak District, Buleleng, Bali Province, quite strategic because it is on the edge of Singaraja-Gilimanuk Street. It is approximately 53 kilometers to the west of Singaraja City. It is located in a bay and the western part which is a headland, natural shades and has a censored aura. In the rainy season, a green cluster of hills will be an amazing view of the temple

In the area of Pulaki Temple around 1987, found some tools from prehistoric times of stone goods such as ax-shaped stone, stone pics, and others. Beside as a holy place to worship to The God, Pulaki Temple nowadays became one of the tourist attractions in North Bali. Another attraction in this area is the monkey inhabitants in this area. The monkeys are always crowded wandering in the temple area. The monkeys are funny and not dangerous. But keep always be careful if you bring some luggage or anything. 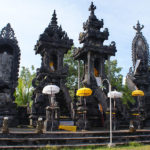 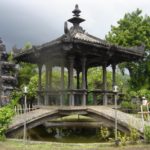 Ponjok Batu Temple is located in Julah Village, Tejakula District, Buleleng Regency. The temple is located on a promontory where there are many rocks that are overgrown with frangipani trees. The architecture of this temple is built with a black stone structure that is designed to be strong, symbolizing holiness as well as a characteristic of the stone of the temple. The temple has a beautiful view of the beach. Ponjok Batu Temple means a stone promontory, or peninsula in the land that juts into the sea. This temple is a place of public worship, but in the front area of the temple, there is a place of worship for who will have a journey. Ponjok Batu Temple is included in Jagat or Pura Dang Kahyangan.  The ceremony of Ponjok Batu Temple is held on Purnama Desta (Desta Full moon) and Sasih Kasa Purnama Kasa.

The Uniqueness of Ponjok Batu Temple is a Stone Boat in a temple.  This becomes a prima donna of the Ponjok Batu Temple that makes a lot of curious people want to know about the existence of a stone boat that located on the seaside. This boat is not big, grounded by a strong rock and very purified. To be able to see it we live down the stairs to the rocky lips, the advice to remain cautious because the sea waves are heavy. From there we can see this boat, and right in front, there is a cave-shaped coral that is usually used for places to Melukat or purify the body and mind by the purified water. 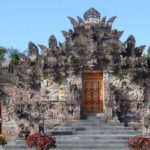 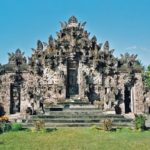 Beji Temple is one of the famous northern Bali temples devoted to Dewi Sri, who is a goddess of agriculture and rice for the people of Java and Bali. In this temple, it can be seen the difference between the architecture of the temple in northern and southern Bali. Beji temple is a holy, large and beautiful temple located in the Sangsit Village, North Bali. The temple is within a seven-kilometer transfer east from the Buleleng regency’s capital of Singaraja, and eight kilometers’ drive from Lovina Beach.

In the Nista Mandala section, there is a tall building called ‘Bale Kulkul’. Bale kulkul is a tall building in which there is a big bunch. The function of Bale Kulkul is to gather the residents around. Among the temples Nista Mandala and Madya Mandala there is a very magnificent temple building with carvings with high artistic art. Entering the Madya Mandala section, there are several similar buildings such as the hall which is on the south side of ‘Bale Sekaulu’ and ‘Bale Sekapat’ and in the north, there are ‘Bale Roras’ and ‘Bale Paebatan’.

Moving to the main part of Pura Beji the Main Mandala, In this section are found many holy buildings and this is where Hindus do worship. Apart from that, on every wall in this Beji Temple, there is a relief form of flowers or plants are beautifully etched around the temple. In each carving, it has its own uniqueness and meaning. The area in Pura Beji is also quite cool because there are shady trees around it. 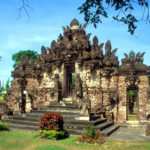 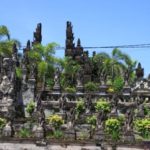 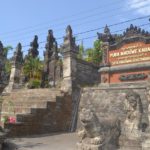 Maduwe Karang Temple is constructed in 1890 by people who arrived in Kubutambahan from an extinct Balinese village of Bulian, located in Kubutambahan Village, Kubutambahan Sub-district. Approximately ± 12 km east of Singaraja City, 1 km from T-junction of Singaraja, Kubutambahan, and Kintamani. The temple is dedicated to Batara Maduwe Karang (Maduwe Karang Lord), A God which offers protection on the fertility of the agricultural land. The temple compound is surrounded with walls, which is reinforced at intervals by pillars topped with carved floral decoration. The temple consists of three levels, namely Jaba Pura outside the temple or Jabaan, Jaba Tengah, and Jeroan , the deepest part is the most purified. Two stone staircases climbed toward Jaba Pura, which was fronted with stone statues, thirty-four in number, drawn from characters and scenes of the Ramayana story.

The statue that stands in the middle shows Kumbakarna who was fighting and beaten by the monkeys of the Sugriwa troop. What is unique, on the wall on the north there are carved reliefs of people riding a bicycle that the rear wheels contain tunjung leaves. Another attraction is Durga carving in its manifestation as Rangda, in a sitting position with both knees wide open so that the genitals are clearly visible. His right hand was placed over the head of a small boy standing next to his knee, his right foot rested on a horned beast lying down. On the other side of the temple’s wall is a sculpture of a flying horseman and an Astimuka sculpture. This figure is depicted the same as Sang Hyang Gana (Ganesha), the god with the face of an elephant. Kungkungan Pura Maduwe Karang is located in Kubutambahan Village, 12 km east of Singaraja.

There is a bas-relief on the side of the main shrine in Maduwe Karang Temple is believed to be the depiction of Dutch artist W.O.J. Nieuwenkamp who explored Bali by bike in 1904.

On the side of the main shrine is a depiction of a westerner riding a bicycle. The relief is a depiction of Dutch artist W.O.J. Nieuwenkamp who explored Bali with his bicycle in 1904. This is not the only depiction of a westerner in a Balinese temple: At the Pura Dalem, Jagaraga, to the east of Singaraja, a relief shows a car driven by bearded foreigners being held up by a gangster armed with a revolver. The reason for a number of international-influenced relief in the temples of northern Bali is because it being the entrance to the island of Bali in the early 20th century. The men on a bicycle relief are not in its original condition as it was badly damaged in the 1917 earthquake and was altered during the restoration process. The restoration adds more floral decoration in the original bas-relief.

Another bas-relief shows the goddess Durga in her manifestation as the Mahisasuramardini, the banisher of the malevolent bull. It depicts Durga as Rangda seating with her knees spread open, exposing her genitalia. A dog is shown licking the secretions of her exposed genitalia. Her right hand is placed on top of a person’s head while her right foot stomp over a bull’s head 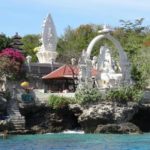 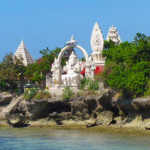 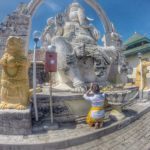 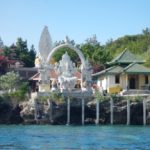 Beside of a good place to having some underwater activity, Menjangan island also has a beautifulness temple should you visit. There are at least 7 other temples on Menjangan island, upon arriving at the pier, about 50 meters we meet with a small statue. In Bali we called it “Pelinggih”, to pray to have a smoothness in doing worship to the next major pretense, such as;

Menjangan Temple is quite popular, as the popularity of this island became a tourist destination, Menjangan Island is just a small plot of 175 hectares part of the West Bali National Park, not inhabited by humans but dominated by Menjangan animals. That is the uninhabited island is called Menjangan island, to go to the island of course only by sea transportation, that is by boat or jukung from Lalang harbor with a travel time of 30 minutes or from the port of Banyuwedang with travel time 40 minutes.

Menjangan Temple is located in Menjangan Island, Sumber Klampok Village, Grokgak district, Buleleng Regency. The Menjangan Temple is quite popular for Hindus for the purpose of Tirta Yatra, its location across the island, without its inhabitants, making it quite unique and special, providing a serene, magical and beautiful presentation of nature. Menjangan Temple located on the island of seclusion, without the crowd and without noise, making those who want to get closer to the Creator more solemn and calm. In the morning of Menjangan Temple, you can see the beauty of sunrise perfectly. Menjangan Island gives a special dish to those who do worship in this place but can see the beauty of blue sea scenery. 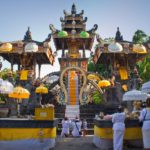 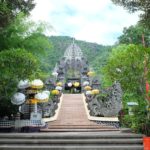 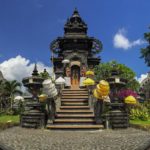 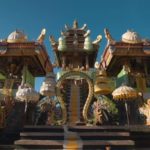 Melanting Temple is located on the north coast of the island of Bali, in the village of Banyupoh, Grokgak district, Buleleng regency, about 50 km west of Singaraja town. The temple story is quite interesting. Believe it or not, this mystical story is still being discussed to this day. This temple is located quite close to Pura Pulaki, it is because this temple is one of the statues of “Ida Batara Sami” which includes with the family from Ida Batara Pulaki, Ida Batara Kertaning Jagat (in Banyu Poh Village), Ida Batara Mutering Jagat (in Dusun Yeh Panes – Pemuteran), and Ida Batara Pabean. Melanting Temple is a place of worship to pray for all the produce of the earth or the other as a thank-you to Bhatari Melanting who stays there and pleads for safety so as not to be disturbed by the mystical.

But slightly different from Pulaki Temple, Melanting Temple is located somewhat in and through small forests and people’s homes along the way. This temple is a pretty grand temple and is in the middle of the forest. Melanting Temple atmosphere is beautiful. The beautifulness is surroundings by pristine buildings look sturdy standing with majestic. The uniqueness of this temple is the beautiful and magnificent buildings of the temple. The view from the temple is very beautiful, it is because the location of the temple in the middle of the forest but still touched by vehicles such as cars.