GOOD TO KNOW ABOUT NYEPI DAY IN BALI

GOOD TO KNOW ABOUT NYEPI DAY IN BALI 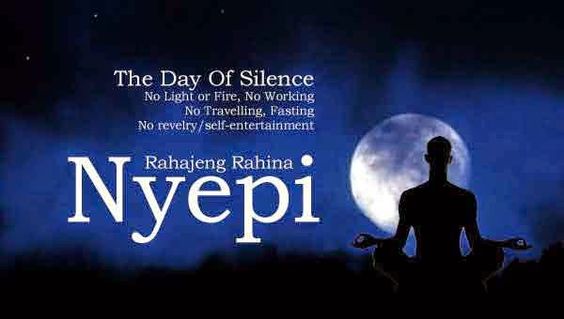 Nyepi day is the day of silence that celebrates on Caka New Year. Nyepi Day is celebrated on in the Tilem Kesanga (On the dark moon period IX). Hindus believe that Nyepi Day is a day of purification of the Gods. Because of that Hindus are worship sacred against them. Nyepi is a Hindus New Year based on the Caka Calendar that comes from word Sepi or Sunyi or Senyap ¬means quiet and silent. The main purpose of Nyepi’s celebration is to appeal to The God Almighty or Ida Sang Hyang Widhi Wasa, to purify Bhuana Alit (human nature/microcosm) and Great Bhuana/macrocosm (universe). On Nyepi Day, there are 4 things called by Catur Brata Penyepian should do for Hindus.

Amati Geni is not allowed to light a fire in both birth and inner. The meaning of a fire in birth is the invisible fire or the activity of lighting a fire such as smoking, lighting candles, lighting a stove, or even lighting a match that can cause a fire. While the inner fire is any form of emotion involving elements of fire such as anger or other negative things.

Amati Karya is not allowed to work or do some activity such as work, school, travel, even small activities such as cleaning the house and so forth. Amati Karya, Hindus are asked to focus on reflection and physical self-awareness. The goal is none other than to specialize in worship and make yourself better in the next year.

Amati Lelungan is the third of Catur Brata Penyepian means that all Hindus are not allowed to travel, not allowed to disturb other people. At Amati Lelungan, Hindus are not recommended to travel or disturb the other people. As the name suggests, Nyepi is expected to become a platform for every Hindu to retire and draw closer to the Almighty without thinking of worldly affairs like on a typical day.

Amati Lelanguan is the forth of Catur Brata Penyepian means Hindus are not allowed to pleasure (no pleasure). Amati Lelanguan advocates Hindus to meditate or yoga so as to have a clear mind. In this phase Hindus will contemplate what they have done in a year covering the Tri Kaya Parisudha, these are Kayika (deeds), Wacika (words), and Manacika (mind). After contemplating all the mistakes Hindus will make a resolution or called Tri Kaya Parisudha what will be done in the coming year.

SOMETHING THAT SHOULD NOT BE MISSED DURING NYEPI DAY
1. MELASTI CEREMONY

One of the precursors to Nyepi is the Melasti ceremony, also known as ‘melis’. Whilst just as visually extravagant as a temple ceremony, Melasti is of incredible importance to the annual (and sometimes more) rites of the Balinese Hindu. During this ceremony, lines and lines of local Hindus will journey to the sea or a holy spring for a special purification.
As the term purification suggests, the goal of Melasti is to remove impurities, but unlike the Melukat (Ritual For Cleaning And Purifying Our Body, Mind, And Soul) ceremony it isn’t the ‘self’ that is being purified, but rather of a village, its deities (through their earthly representations) and other external components.
At the beach, the Pratima shrines and icons in which ancestral spirits reside (like the Rangda and Barong puppets) are laid down. Here the priest will pray and chant his mantras, flicking holy water, his flower and ringing his prayer bell. Around him, worshippers join in prayer too among other rites of worship from dance, to the ngeruk knife ritual; many fall into a trance during such a holy time, as they are induced into a state that brings them closer to the deities.
Both positive and negative elements are brought here to be cleansed, as, in the Balinese belief of Rwa Bhineda, opposing forces are equally important for balance in the world. Divine, positive deities are blessed and thanked with gifts, the negative spirits, the demons (the Bhuta and the Kala) are placated with blood sacrifices to keep death, disease, and pestilence at bay.
Whilst yes, the Melasti ceremonies are the blessings for the external, the symbols of ancestors, of good and evil, they at the same time purify the self. The blessed items are symbols of the cosmos, the universe, Bhuwana Agung (the larger world), whilst we humans are Bhuwana Alit (the little world). But a relationship exists within Balinese belief that Bhuwana Agung and Bhuwana Alit exist within one another. So during Melasti, both people and the world around them are purified, cleansed of bad thoughts, deed, and negative influences.
2. OGOH – OGOH PARADE 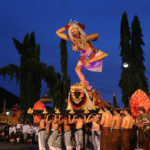 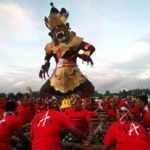 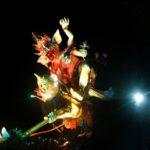 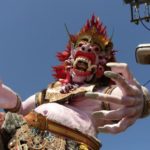 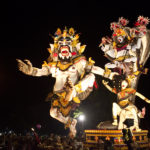 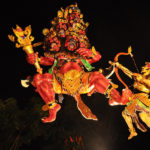 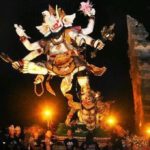 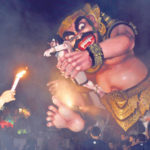 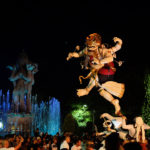 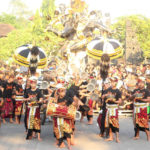 Ogoh-ogoh is a sculptured artwork in Balinese culture depicting Bhuta Kala’s personality. In the Hindus philosophy, Bhuta Kala represents the power (Bhu) of the universe and time (Kala) is immeasurable and undeniable.
In the embodiment of the statue in question, Bhuta Kala is depicted as a large and frightening figure; usually in the form of Giant.
In addition to the form Giant, Ogoh-ogoh is often also depicted in the form of creatures living in Mayapada (world), Heaven (heaven) and Hell (hell), such as: dragon, elephant ,, Widyadari, even In its development, there are made to resemble famous people, such as world leaders, artist or religious figure even criminals.
In its main function, Ogoh-ogoh as Bhuta Kala’s representation, made ahead of Nyepi Day and the Ogoh-Ogoh Parade will celebrate around the village on Pangrupukan day, the day before Nyepi Day. Ogoh- Ogoh Parade will accompany by live Balinese gamelan orchestra which calls Beleganjur.
According to Hindu Dharma scholars and practitioners, this process symbolizes the human consciousness of the universe and the enormous time. These forces include the power of the Great Bhuana (universe) and Bhuana Alit (the human self). In Tattwa’s view (philosophy), this power can bring sentient beings, especially humans and the whole world to happiness or destruction. All this depends on the noble intention of human beings, as God’s most noble creature in keeping himself and the whole world.

NYEPI RULES THAT THE GUEST NEED TO KNOW

Thank you for your kind understanding and we wish you have a pleasant stay!