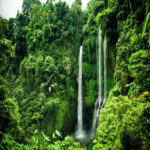 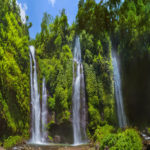 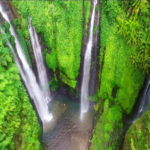 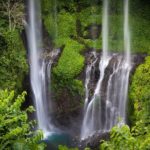 Reviewing about tourism on the Bali Island is endless The Bali Island is most famous for its beauty on the world stage. But it is unfortunate because most of the explored travelers are mostly only tourists that are only going to the beach. Whereas the island of Bali also has a lot of tourist destinations in the mountainous area. One of them is Sekumpul Waterfall, located in the north of Bali. The location of Sekumpul Waterfall is in the Sekumpul village, Sawan district, Buleleng regency. There is a waterfall in the midst of a lot of trees in the hill area. The name Sekumpul means “Kumpulan” or Set. This is because there is more than 1 waterfall there, and based on the information there are 7 waterfalls not too far away from each other.

Before you can enjoy the waterfall up close, visitors will be invited to travel on foot after the entrance. Passing through several concrete steps and a handle of iron. This makes the visitors feel safe to descend the hills. When going down the stairs you can hear the sound of a thundering waterfall hitting the pond of water under it. Once down the stairs, there is a bridge with a clear river water below it. Soft tracking shortly after passing the bridge through a small forest and then you get to the Sekumpul Waterfall.