Balinese Names by Birth of Order

BALINESE NAMES BY BIRTH OF ORDER 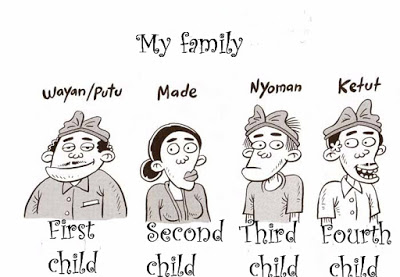 If a couple of husband and wife has 4 children, the name of them is :

And then, how if they have more than 4 children? The name for the fifth and etc will, her or his name will be back to the first name of Bali. Back to Gede, and then Kadek, Komang, and Ketut again. So don’t be startled if all people in Hindus have a same first name. This is the culture and we will always maintain to conserve our culture.