In every Hindu marriage ceremony, no tradition that has existed in society, since Hindus in addition to the Vedic scriptures are also guided by Śmrti and Hindu law based on customs that have been passed down through the generations in the so-called places. By performing ceremonies based on the Vedic scriptures and the grammatical way that has been handed down from generation to generation, it will be the happiness in this world (Jagadish) and eternal happiness (Moksa)

RITUAL OR PROCESSION OF BALINESE WEDDING

After the family of the groom come to marry or in the Balinese language is called “Memadik” or “Ngidih”, the two sides of the family go to choose the right time to celebrate a wedding ceremony. The good day that seeks is a ritual of the overall ceremony, such as good day for Pangenten (notices), violence (proposed / Mapadik), pick-up of the bride and groom of the wedding ceremony. Balinese people are very religious they trust that a good day to married will makes a good relationship in the future. After a good day has been agreed, a day for brides to be picked up and taken to the house of the groom, then the family will prepare the wedding ceremony like offerings.

Similarly, the ritual of Siraman in the Javanese custom, in the customs of Bali’s wedding also has such a tradition. The difference is, before the splash, the bride is stretched by a concoction made of peacock leaves, turmeric, Frangipani flowers and rice that has been finely ground, and Merang water to shampoo. This preparation as a form of welcoming the wedding the next day. In addition to the outward preparation, mental and inward also needs to prepare by multiplying prayers to the God in order to reduce his happiness and grace. In undergoing Ngekeb ritual, the brides are forbidden to get out of the room from the afternoon until the families of the groom come to pick up. Aiming to prepare the bride from the life of a teenager to a wife and a housewife by invoking a blessing to God Almighty to be willing to reduce happiness to this couple and later they are given a gift of good descent.

Traditionally, the wedding ceremony is not held in the women’s residence like most of the area, but it is held in the men’s residence. That’s why a bride is picked up. However, before being picked up to be brought, the bride has been blanketed with a thin yellow cloth ranging from head to toe. The yellow fabric that wraps the bride’s prospect is likened that the bride is ready to bury her past as single to welcome a new life, married life.

Slightly similar to the opening ceremony of the door in Sundanese custom, the difference lies in the person knocking on the door. If in the Sundanese tradition the man knocks on the door of the groom, but in Balinese custom, there is a messenger called Mungkah Lawang who is in charge of knocking on the door of the bride’s room three times. The arrival of the groom is also reinforced by the song sung by the messenger of the groom (Malat). The developed poem contains the presence of the groom to pick up the bride. Then the reply song sung by Malat from the woman is heard saying that the bride is ready to be picked up.

Got a green light, the groom opened the door after being allowed and invited by the women’s family. The brides are carried onto a stretcher to be immediately taken to the male family’s residence without being accompanied by the parents of the bride, but a messenger is appointed to witness the wedding ceremony.

Mesegeh Agung ritual is a special ceremony to welcome the bride. Arriving at the groom’s residence, the bride and groom are lowered from the stretcher to prepare for the procession Mesegeh Agung. Again, the bride and groom are guided to the bridal chamber. The yellow cloth that still covers the body of the bride will be opened by the prospective groom’s mother and exchanged for kepeng silat (coin) for two hundred coins.

Guided by a Hindu priest, the procession of Mekala-kala begins just as the sound of the bell resonates. The implementation of the mekala must be in accordance with the following stages.

By wearing the greatness of the bride, they do Mewidhi Widana ceremony led by a Sulinggih or Ida Peranda. This event is a refinement of indigenous marriage wedding to improve the bridal self-cleaning that has been done at previous events. Furthermore, both of them go to worship that is a place of worship to pray for permission and blessing of power. The event was led by a stakeholder.

In the customary rules of Bali, married women will follow her husband. So, in honor of the family’s ancestors, a ceremony was held to invoke farewell to the bride’s ancestors called the table ceremony. The arrival of the bride to undergo the ceremony was accompanied by the bridegroom family who brought along various traditional snacks white and red, cake pillow, diamond, sugar, coffee, fruits, side dishes and so forth. 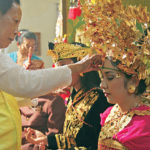 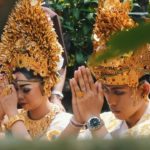 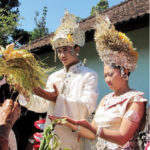 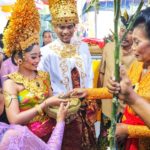 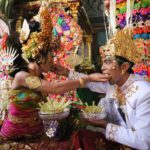