Bali is the Island of the Gods which is eminent for its natural beauty, its culture, and its friendly people. With the scenic views of rolling hills and mountains, a steep coastline beaches with soft white or black sand, lush rice paddies which adds to the aura of serenity. A colorful culture, unique tradition, and deeply spiritual religion, it’s all a common secret why Bali renowned as The Island of The God and a One Thousand Temple Island. Everything makes Bali’s background are exciting and its promises happiness. Bali deserves to be heaven on earth. In the daily life of the Balinese people, they are guided by the rules that apply in the community. In addition, the Balinese people also guided by the calendar when they would do something new like starting business, wedding ceremony, cutting hair, and so on.

Why use a calendar?

Bali has its own calendar that contains the dates of a big day in Indonesia, horoscope, public holiday and also contains about the Hindus region ceremony and a good day to do something or start something new, complete with the prediction of human character based on the birth of Bali.

The Balinese Calendar also contains “Dewasa Ayu” which means a good day to do something or starting something new. 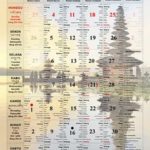