The Legend Of How Bali Becomes The Island

THE LEGEND OF HOW BALI BECOMES THE ISLAND 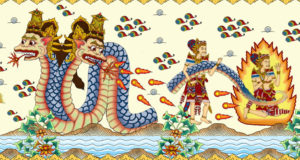 According to the legend, Bali was originally land that was incorporated with Java Island. Once upon a time there lived a Brahmin named Sidi Mantra which was very famous with his powers. Sang Hyang Widya or Batara Guru (Gods) gave a gift of treasure and a beautiful wife. After several years of marriage, they got a baby boy named Manik Angkeran.

Manik Angkeran grew into a handsome and clever young man, but he likes to gamble. He often lost and was forced to stake his parent’s assets, sometimes he also owed. Unable to pay the debt, Manik Angkeran asked his father to help to do something. Sidi Mantra fasted and prayed for the help from the Gods. Suddenly he heard a voice, “Hi, Sidi Mantra, in the crater of Mount Agung there is a treasure guarded by a dragon. It’s the Naga Besukih Dragon. Go there and ask The Dragon to give some treasure. ”

Sidi Mantra went to Mount Agung by overcoming all obstacles. Arrived at the edge of the crater of Mount Agung, he sat cross-legged. As he rang the bell he read a spell and called the name of The Besukih Dragon. Not long after that, the Dragon came out. After hearing the intention of the arrival of Sidi Mantra, Naga Besukih stretched and from his scales came out gold and diamonds. After saying thank you, Sidi Mantra excused himself. All the goods he got, he gave to Manik Angkeran in the hope he will not gamble anymore. But not, in reality, the treasure was gambled away very quickly. And then Manik Angkeran asked his father for more help. However, Sidi Mantra was disappointed and refused.

After arriving at the crater of Mount Agung, Manik Angkeran sounded the bell. He was really scared when he saw The Dragon Besukih. After the dragon heard the intention of the arrival of Manik Angkeran, he said, “I’ll give you the treasure you asked for, but you have to promise to change your behavior. Do not gamble anymore. Remember the law of karma. ”

Seeing that the son was dead, Sidi Mantra was very sad. He immediately sought the Naga Besukih and begged his son to live again. Besukih Dragon grants the requirement of Sidi Mantra with the condition that Sidi Mantra should restore the tail Dragon Besukih as normal. Then with magic, Sidi Mantra made the tail of the Dragon back to normal. After Manik Angkeran was alive again, he apologized and promised not to repeat it again. Sidi Mantra knew that his son was converted but he decided not to live together again.

“You have to start a new life,” Sidi Mantra said. In the blink of an eye, he vanished. In the place where he stood arose a source of water that grew increasingly large to become the sea. With supernatural powers, Sidi Mantra makes a line that lavishes him with his son. And formed a small island, and that formed the island of Bali. That is the legend of the formation of Bali Island.